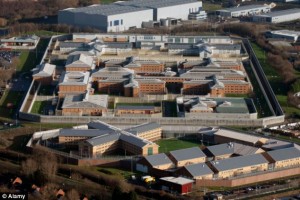 This headline might possibly bring about some unwanted views, but perhaps its intrinsic ‘appeal’ to the curious may work.

Lyn and I spent the evening at HMP YOI Isis, part of the Belmarsh complex in south-east London. Not a place one would relish going to, as a visitor, educator or prisoner. Built in 2010, it houses men between the ages of 18 and 30 who have been sent to prison often as a last resort and was built to Category ‘B’ standards, which means that it has quite high security for longer term inmates. I hesitate to use the word, ‘offender’, as I feel it is a term used far too frequently by the establishment, often erroneously.

For me, initially, it was about going back to prison, this time as a visitor. Yes, going beyond the visits hall and into the jail dressed in civvies and knowing I would be able to walk out later felt very strange, almost unnerving, yet the staff made the ingress as easy as possible. The Pimlico Opera company, a truly great bunch of individuals who put on shows in UK prisons had taken on the task of producing a new version of Our House, a light opera inspired and written by Madness, featuring songs from the truly brilliant back catalogue of same. The prison gym had been transformed into a theatre, complete with full lighting rig, sound system, tiered seating and interactive stage. I had taken the opportunity to read a critique of ‘Our House at Isis’ by Musical Theatre Review, so kind of knew what was coming our way. However, as the production was on its final night last night, I felt that a more generous appraisal would be appropriate.

Led by Tom Child and Jocasta Almgill as Joe Casey and Sarah, his girlfriend, the cast featured Suggs McPherson as Joe’s dad and Victoria Ward as his long-suffering and loving mum. As a Madness fan, the music was, for me, going to be a big part of the evening and it did not disappoint. To say at this stage that the production was professionally run from start to finish wouldn’t even do it justice. It carried weight, gravitas, emotion and passion, which brings me to the best part of the whole evening, the supporting cast. Twenty-four inmates of HMP Isis played their roles extremely well and whilst I would hesitate to single anyone out, I found Ray C as Reecey to be highly convincing. Let’s watch out for him in the future as his previous time spent studying performance arts at Kingsway College doesn’t seem to have been wasted at all. Great stuff. Other notable performances were Hakeem J as the hapless and ultimately ‘unsuccessful with girls’ Lewis and Jordan H as Emmo. Their interviews in the programme show them as self-effacing and displaying an honesty rarely found amongst the young. I also enjoyed the performance of Callum, played by Jordan D, an inmate who on his own admission speaks mainly Patois but managed his role very well. The supporting professionals from Pimlico Opera were highly entertaining, especially in the song and dance routines which were superbly choreographed by Chantry Dance Company.

So, a two hour light opera. In a prison. On a Friday night. Was it worth it? You bet it was. This is rehabilitation working at its best. Among those in the audience were the Chief Inspector of Prisons, Nick Hardwick-a man who in this writer’s opinion will be sorely missed by those wishing to improve conditions in Britain’s prisons, James Timpson of Timpsons-a company which has chosen to employ ex-prisoners in the workplace and many others who believe passionately in the right way to help the incarcerated.

We need a lot more of this.