Ah, the trials and tribulations of the e-author. At least poor old JK Rowling never had to negotiate the pitfalls of attempting to get her work to a wider audience. No, all she had to do was slog away for years in a damp cafe and look where that got her. So, it’s steep learning curve for moi, (et toi if you are persevering with my endless updates as to how it’s all going with Nook, Kobo, Kindle and Lulu) and a hell of a lot of swearing as one publishing tool after another rejects my labours. Today, however, is another day and I am delighted to say that both the full version of Greed and the first ten chapters of Right to Live, my post-holocaust novel based in Poland, Germany, Czechoslovakia, Austria, South America, Israel and the USA are now available across all the e-book formats via the Kindle Store, Kobo and Lulu. Having proudly negotiated my way through the legal requirements of publishing via iTunes, I now have a US E.I.N. number and within a few days, will have Greed available in the Apple Store. 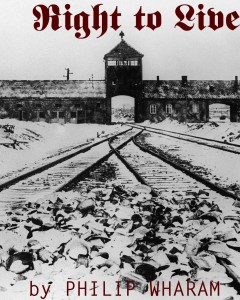 Right to Live is a novel, based heavily on historical fact revolving around the life, disappearance and re-emergence of the “Angel of Death of Auschwitz”, Dr Joseph Mengele. Key characters emerge as the book unfolds and there are many twists and turns to enthral the reader. It is, however, not a book for the faint-hearted, documenting and relating the terrible truth about the concentration and extermination camp system which was so widely adopted by the Nazis in Eastern Poland and beyond in what is now modern-day Ukraine, Lithuania and Belarus. As well as the real characters portrayed in the book, there are many fictional beings brought to life and, in some instances, sadly often to death within its pages and as you make your way through the trilogy, which will be completed in 2014, you will get to know so much about them; their strengths and weaknesses, lives and loves, all the while punctuated by terrible memories and flashbacks to the terror that was Auschwitz-Birkenau and the Warsaw Ghetto.